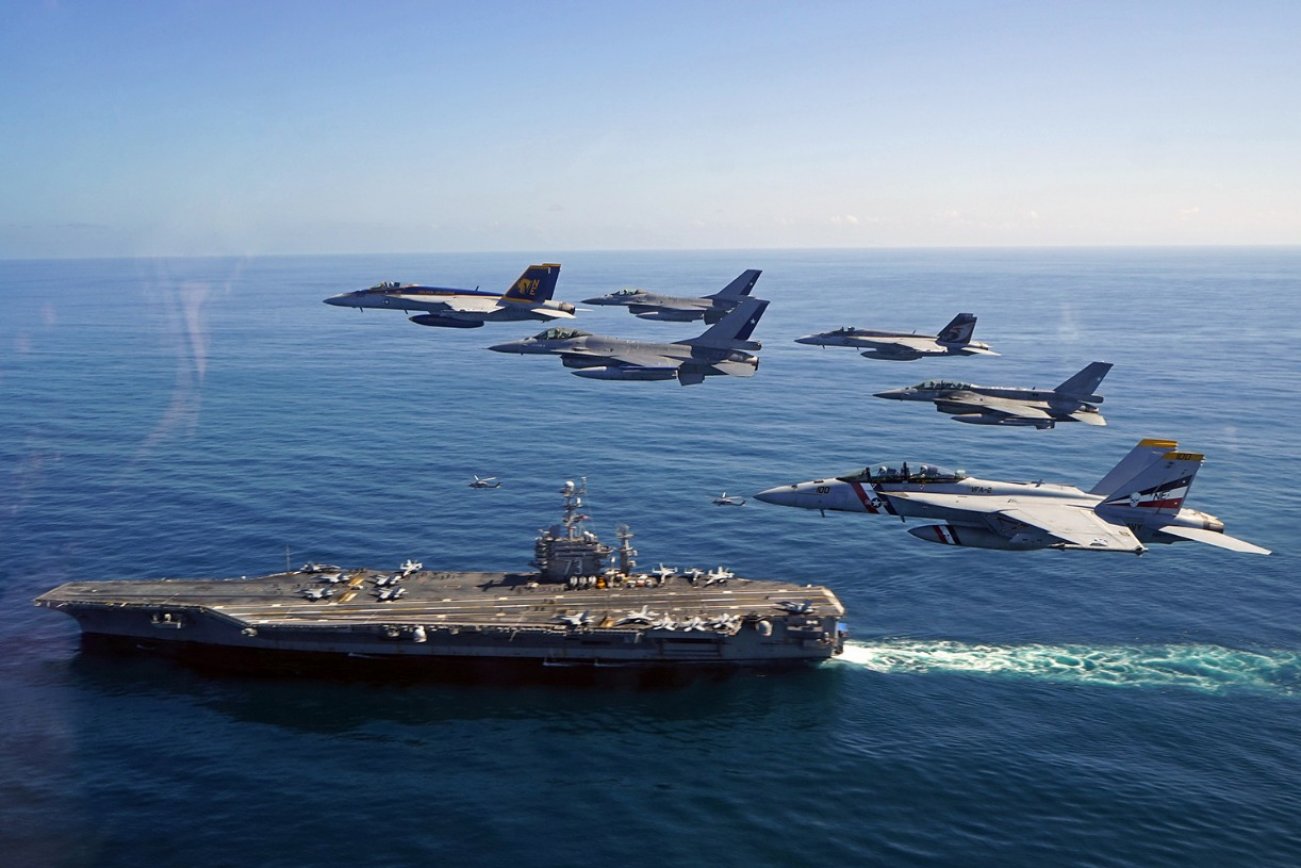 These days, an aircraft carrier is a foreign policy tool, not a defense necessity.

Here’s What You Need To Remember: America’s aircraft carriers are no longer intended for use in naval warfare. They’re designed to give the President the power to take control of a substantial chunk of the surface of the Earth and put it to use in the national interest of the United States, or at least deny its use to anyone else. Whether or not that ability is worth the price is open to question. But no other policy tool can do the work more flexibly, or more effectively.

In the fourth week of October, 1944, the United States Navy sank the Japanese fleet. Nearly all of it. Japan lost twenty-eight major surface combatants and more than 300 aircraft in the four-day Battle of Leyte Gulf, fought off the east coast of the Philippines. Leyte Gulf was the final throw of the dice for the Imperial Japanese Navy, which never recovered from the loss.

The Battle of Leyte Gulf is well-remembered as the swan song of the battleship, with radar-guided American gunnery scoring dozens of hits on Japanese targets. Less well-known is the fact that it also marked the end of the carrier duel. Leyte Gulf was the last time that opposing fleets launched large numbers of carrier-based aircraft to seek out and destroy their opponents on the high seas.

If the dreadnought battleship era lasted less than forty years, the carrier duel era lasted less than four. The first major carrier-launched naval engagement in history was the November 1940 Battle of Taranto, when British aircraft from the HMS Illustrious struck the Italian fleet at anchor in a miniature Pearl Harbor. The last was Leyte Gulf.

Since the end of World War Two, the aircraft carrier has reigned supreme over the world’s oceans, undefeated but also untested. With China developing anti-ship ballistic missiles with ranges up to 2500 miles or more and Iran boasting of its readiness to do just about anything to score the prestige victory of hitting a carrier, the continued reign of the carrier as the king of the ocean may seem far from assured. But that is to mistake the method for the mission.

The aircraft carrier played an indispensable role in the Allies’ victory in the Pacific in World War Two. But it is a commonplace bordering on a cliche to warn that strategists are perpetually preparing to fight yesterday’s wars. What about tomorrow’s wars? If the aircraft carrier hasn’t had to fight for naval supremacy for the last 75 years, why should we expect it to do so in the future?

We shouldn’t. The battle for naval supremacy in the Pacific was yesterday’s war, and the aircraft carrier is very much tomorrow’s ship. Neither China nor anyone else is ever again going to launch a surprise attack on Pearl Harbor while landing troops in the Philippines and Malaysia in a bid to conquer the entire Indo-Pacific region. Satellite monitoring and nuclear-powered attack submarines have made major naval operations like these obsolete.

The real mission of the twenty-first-century carrier is to establish an extraterritorial zone of control overseas. An American aircraft carrier sits at the center of a circle with a radius of 500 miles in which the United States calls all the shots — figuratively and literally.

The only limitation is that the center of the circle has to float on water, but even that’s not as much of a limitation as it seems. Most of the world’s population and economic activity are concentrated on its coasts. What’s more, most of what connects a country to the outside world travels on, over, or under the world’s oceans. China’s Belt & Road Initiative has spectacularly failed to change that.

Of course, the Navy has to prepare for all contingencies, and so it has to be ready to fight a sea battle that will never come. That’s why every American carrier goes to sea with a whole contingent of powerful auxiliary ships. But despite its name, the purpose of the carrier strike group isn’t really to strike. It’s to seize and hold a million square miles of the Earth’s surface against all but the best armed and most determined opponents.

China and Russia can prevent the President of the United States from seizing and holding control of their coastlines, but the rest of the world is at his disposal.

Obviously, the United States doesn’t actually “need” aircraft carriers. These days, an aircraft carrier is a foreign policy tool, not a defense necessity. No one is going to attack the United States, and if they were, land-based aircraft and submarines would provide the best defense. As for patrolling the world’s shipping lanes, frigates can do that. You don’t do search and rescue with an F/A-18.

Many defense analysts openly question the continuing military relevance of the aircraft carrier in an era of precision missiles and armed drones. Others warn that the consequences of losing one of these 7000-person cities of the seas are so scary that presidents and their advisors may prove reluctant to actually risk them in battle.

These skeptics are missing the big policy point: America’s aircraft carriers are no longer intended for use in naval warfare. They’re designed to give the President the power to take control of a substantial chunk of the surface of the Earth and put it to use in the national interest of the United States, or at least deny its use to anyone else. Whether or not that ability is worth the price is open to question. But no other policy tool can do the work more flexibly, or more effectively.

Salvatore Babones is the author of The New Authoritarianism: Trump, Populism, and the Tyranny of Experts.