Having abused his power of presidency to incite a mob attack on the legislative branch, President Donald Trump has crossed every line of law and decency to warrant his immunity from the requirements of law in the United States of America.

The Trump enablers both inside and outside the Congress, who counsel to ‘move on’ and disregard Trump’s outrageous criminal conduct, which has resulted in several deaths and a major stab at America’s global prestige as the ‘beacon of democracy’, are now on the defensive and unable to justify or ignore the scope of depravity of Trump’s actions, which are impeachable, that is indictable, by any stretch of imagination.

Indeed, inaction is not an alternative.  Trump must be held accountable for his insurrectionist misconduct, aided and abetted by members of his family and his personal lawyer, who used incendiary language of “trial by combat” on January 6 minutes before the (mostly hate group) supporters stormed the capitol building, where the lawmakers were kept in underground shelters for hours while Trump and family delightfully watched the mayhem on television and refused the pleas to call in the national guards.

Since then, evidence of capitol police’s complicity with the white nationalists leading the charge against Congress has been piling up, thus leading some lawmakers to introduce a legislation calling for a thorough investigation of this matter, that is of high importance in light of the upcoming Biden inauguration on January 20.

Already, a number of army vets, active duty police officers as well as Republican lawmakers who took part in the Trump-led insurrection have been identified and some have been arrested and or suspended, reflecting a dangerous infiltration of the country’s security apparatuses by the right-wing hate groups, who represent a clear and present danger to American democracy. These groups, cheered on by Trump even in his much-delayed response to the mob attack on Congress, when he openly said that he loves them, are now threatening further disruptive action and, for sure, Trump’s ability to avoid any serious legal backlash against him would embolden them.

The chief arsonist in the White House has finally been defanged by Tweeter, which has suspended Trump’s account that for several years acted as his most potent weapon  — for good reasons since Trump is a clear threat to American democracy and has misused that outlet to spread his Hitlerian venom; one does not give the modern day Hitler the platform to commit crimes against a democratic polity.

No doubt history will judge harshly those Republican lawmakers, particularly in the Senate, who are willing to tolerate Trump’s latest, and most brazen, abuse of power that put the lives of US lawmakers including Vice-President Mike Pence in danger on January 6.  There is absolutely no excuse for these Republicans to dodge their sworn responsibility to uphold the US Constitution and thus allow Trump to get away with his blatantly criminal conduct against the core institution of American Republic.

Even Joe Biden, irrespective of his wish to look past Trump and assume the mantle of presidency without getting bogged down in a Trump-centered controversy, there is the issue of law and accountability that he cannot possibly ignore.  In other words, this is not a matter just for the Congress to decide, it is also Biden’s responsibility to hold those responsible for the January 6 incitement of violence accountable for their action, using his power of presidency to prosecute his predecessor and his gang of enablers who came close to turning US into a banana republic under the patently false claims of “stolen elections;” these claims were soundly rejected by dozens of Trump-appointed federal judges in several states.

The agony of Trump’s wild accusations, culminating in his call for storming the Congress in order to disrupt the certification of Biden’s victory, is not just for history books, it is also a potent source for both lawmakers, judicial and law enforcement officials to track him down and hold Trump accountable, for in the absence of such an effort, Trumpian fascism will live on and continue to menace American democracy.

The right-wing network, Fox News, is now questioning the big tech’s decision to suspend Trump’s accounts as an infringement on freedom of speech, without bothering with the more fundamental issue of Trump’s abuse of freedom of speech, as there are important precedents in the annals of US Supreme Court on this subject, which are relevant to Trump’s upcoming second impeachment.

Regardless of how the new impeachment process will work itself out in the coming days, it seals Trump’s fate as the worst president in US history, whose imminent inglorious exit leaves a nation traumatized by virtue of this narcissistic maniac’s totalitarian tendency — that this author warned against in early 2016, months before Trump was nominated by the Republican Party (1).

With the blood of thousands of Americans on his hand due to his serious mismanagement of the health crisis and his role as a Covid-19 superspreader, Trump is destined to history’s dustbin, his last impression being as the Grinch who tried to steal a lawful election by illegal means.  That he failed and his conspiracy has backfired against him is a testimony to the enduring pillars of American democracy that, although visibly shaken, withstood Trump’s Hitlerian challenge and this simply means that American democracy did not “die” on January 6, but rather survived a putschist attempt by an autocratic outgoing president desperately trying to hold onto power by any means.  Trump the coup-maker must therefore be held fully accountable or there is no future for American democracy.

audio/mpeg newscast150740.mp3?awCollectionId=500005&amp
1. US Security from Michael_Novakhov (88 sites): Stars and Stripes: White House flag, joining Capitol, at half-staff for Brian Sicknick
posted at 20:52:53 UTC by admin via The News And Times Blogs Network – newsandtimes.net
The U.S. flag at the White House is now flying at half-staff after calls for the flag there and at other federal locations be lowered to honor U.S. Capitol Police officer Brian Sicknick.

1. US Security from Michael_Novakhov (88 sites)

The post 1. US Security from Michael_Novakhov (88 sites): Stars and Stripes: White House flag, joining Capitol, at half-staff for Brian Sicknick first appeared on The News And Times Information Network – newsandtimes.net.

Articles of impeachment to be presented Monday
posted at 20:53:25 UTC by Feed Informer via Middle East News
Vote could take place by midweek • Second Republican senator calls for resignation
Capitol Police Officer Who Responded To Mob Attack Dies Off Duty
posted at 20:54:22 UTC by Barbara Sprunt via News : NPR 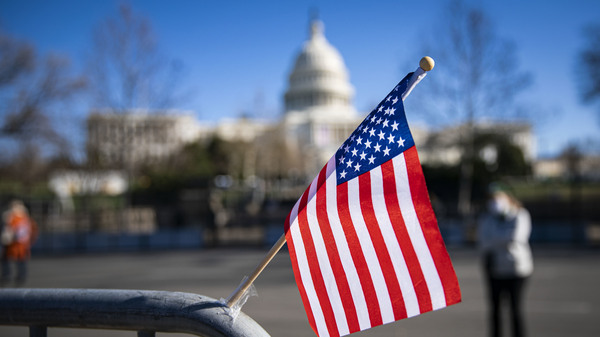 Howard Liebengood’s union says the 51-year-old was among the officers who responded to the rioting at the Capitol Wednesday. The police gave no cause of death.

U.S. lawmakers who were in lockdown when a violent mob breached security at the Capitol last week likely have been exposed to the coronavirus, Congress’ attending physician warned Sunday.

“On Wednesday January 6, many members of the House community were in protective isolation in a room located in a large committee hearing space,” Dr. Brian Monahan wrote in an email to lawmakers.

“The time in this room was several hours for some and briefer for others. During this time, individuals may have been exposed to another occupant with coronavirus infection.”

Here’s the letter from Dr. Brian Monahan to all members of Congress and staff. pic.twitter.com/SeqNoPA6B0

Monahan didn’t specify how many members were in the room or who, if anyone, from the room is known to have tested positive.

Many lawmakers and staff have expressed outrage as images surfaced of Republican members of Congress not wearing masks during the lockdown.

On Wednesday afternoon, hundreds of supporters of President Donald Trump, angry over his loss to Joe Biden in the Nov. 3 election, forced their way into the building that contains the House and Senate while lawmakers were meeting in a joint session to certify Biden’s victory. Capitol rioter to CNN: We could absolutely f***ing destroy you
posted at 20:47:20 UTC via CNN.com – Top Stories
Journalists reported on violence and chaos in real time as rioters stormed the Capitol Wednesday, and some members of the media experienced the wrath firsthand.

Upstract | Syndicated: Parler shutdown by Amazon might not be fatal to the social network – Business Insider
posted at 20:48:57 UTC via Recent News Stories
Amazon will kick Parler off its servers in the early hours of Monday morning, likely forcing the social network to temporarily go down.

Upstract | Syndicated: Days After Capitol Siege, Police Officer Who Protected Senate Dies Off Duty
posted at 20:48:57 UTC via Recent News Stories
Officer Howard Liebengood had been with the Capitol Police since 2005 and assigned to protect the Senate. The cause of his death was not…

Next 20 items
The News And Times Information Network – Blogs By Michael Novakhov – thenewsandtimes.blogspot.com