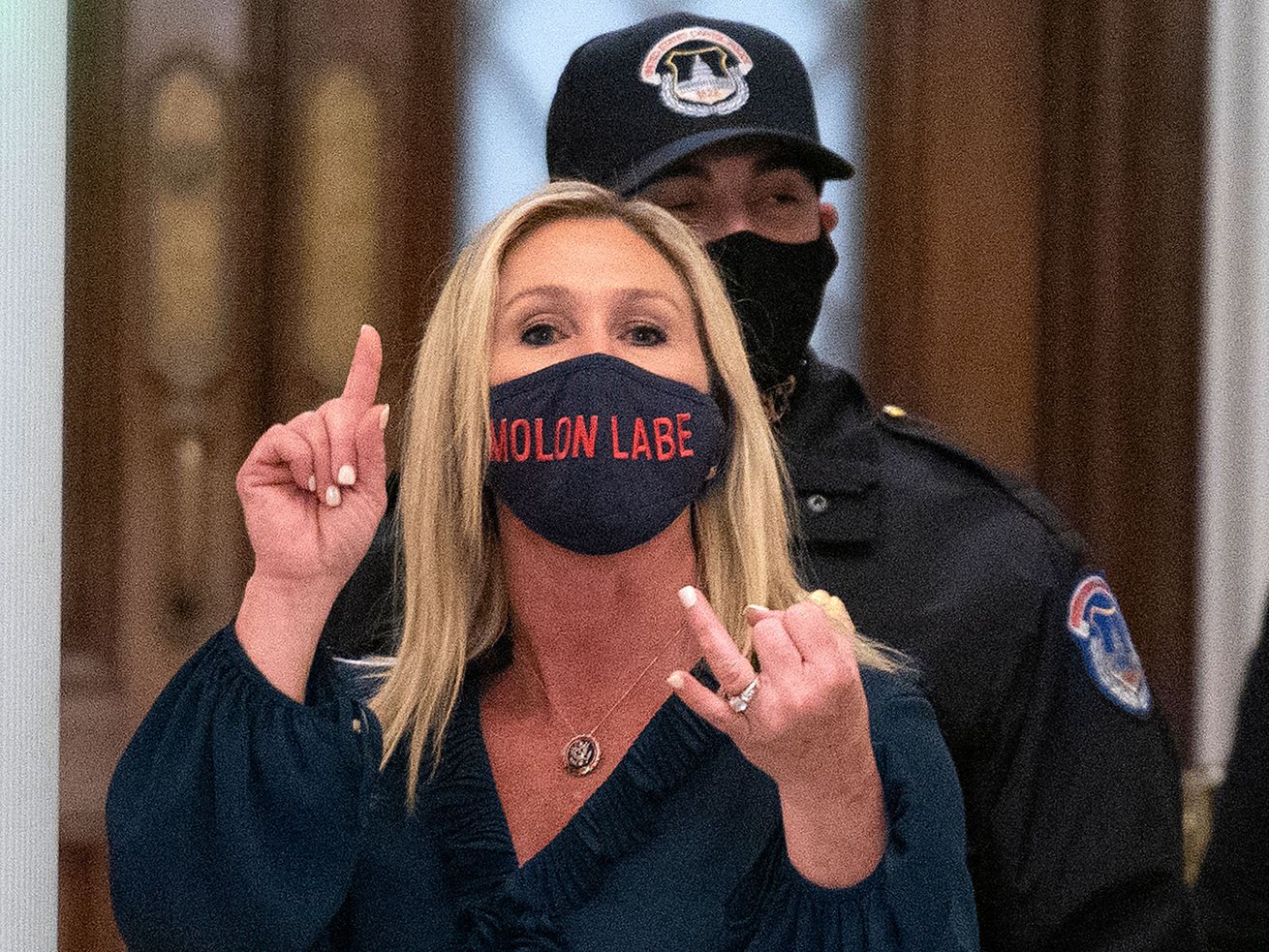 Rep/ Marjorie Taylor Greene shouts at journalists as she goes through security outside the House chamber on January 12. | Andrew Caballero-Reynolds/AFP via Getty Images

Rep. Marjorie Taylor Greene’s (R-GA), one of the most notorious new members of the House Republican caucus for her stated belief in the QAnon conspiracy theory, is facing a fresh wave of criticism this week — and even calls for her expulsion — after old comments resurfaced.

Reporting this week surfaced troubling episodes from Greene’s recent past, including endorsements on her personal Facebook account for the murder of top Democrats and a video of Greene harassing a school shooting survivor who advocates for gun control. Then, on Wednesday, Rep. Jimmy Gomez (D-CA) introduced a resolution Greene’s expulsion. He said her continued presence in the chamber “represents a direct threat against the elected officials and staff who serve our government.”

Greene’s resurfaced comments come at a tense time in Congress. Many Democrats profess that they feel threatened by some of their Republican colleagues after some congressional Republicans openly encouraged a riot at the Capitol on January 6. Both parties have called for “unity” in the wake of the divisive 2020 election, but violent rhetoric makes it tough to come together.

Instead of denouncing her or asking her to publicly apologize, however, House Republican leadership this week seated Greene on the House Education and Labor Committee. Some Democrats had hoped Greene would get the same treatment as former Rep. Steve King (R-IA), who made overt white supremacist remarks and was stripped of his committee assignments in January 2019.

During a press conference Thursday, House Speaker Nancy Pelosi remarked on the perverse logic involved in putting someone who has claimed school shootings are “false flags” on the education committee.

“Assigning her to the Education Committee, when she has mocked the killing of little children … what could they be thinking?” Pelosi said. “Or is ‘thinking’ too generous a word for what they might be doing? It’s absolutely appalling.”

.@SpeakerPelosi on Rep. Marjorie Taylor Greene: “Assigning her to the Education Committee, when she has mocked the killing of little children…what could they be thinking?!? Or is thinking too generous a word for what they might be doing? It’s absolutely appalling.” pic.twitter.com/LtHtA4l6C1

Greene, a first-term Congress member representing a district in northwest Georgia, was widely criticized during her campaign for Facebook posts featuring photoshopped images of Democratic women of color alongside images of her holding a rifle. One of her fundraising messages said, “we’re going to kick that bitch [Pelosi] out of Congress.” She suggested Muslims shouldn’t be allowed in government and spread anti-Semitic conspiracy theories about billionaire George Soros.

Initially, Republicans indicated some initial squeamishness about Greene: a Politico story from last June is headlined, “House Republican leaders condemn GOP candidate who made racist videos.” But now that she’s in Congress, House Minority Leader Kevin McCarthy (R-CA) doesn’t seem to be quite as bothered about Greene’s behavior.

Greene came under renewed scrutiny this week after CNN’s Em Steck and Andrew Kaczynski unearthed Facebook posts from 2018 and 2019 on Green’s personal page endorsing the execution of prominent Democrats.

From CNN’s piece, which was published on Tuesday:

In one post, from January 2019, Greene liked a comment that said “a bullet to the head would be quicker” to remove House Speaker Nancy Pelosi. In other posts, Greene liked comments about executing FBI agents who, in her eyes, were part of the “deep state” working against Trump.

In one Facebook post from April 2018, Greene wrote conspiratorially about the Iran Deal, one of former President Barack Obama’s signature foreign policy achievements. A commenter asked Greene, “Now do we get to hang them ?? Meaning H & O ???,” referring to Obama and Hillary Clinton.

Greene replied, “Stage is being set. Players are being put in place. We must be patient. This must be done perfectly or liberal judges would let them off.”

Before CNN’s piece was published, Greene posted a statement to her Twitter account that didn’t deny her account liked the posts and wrote the comments in question, but suggested someone else may have done it.

Fake News CNN is writing yet another hit piece on me focused on my time before running for political office.

I will never back down to the enemy of the American people and neither should you. pic.twitter.com/K3JuvqrDGS

CNN’s reporting came days after Media Matters’ Eric Hananoki dredged up similarly awful 2018 posts from Greene’s Facebook page in which she agreed with a claim that a 2018 school shooting at Marjory Stoneman Douglas High School in Parkland, Florida that resulted in 17 deaths was actually staged.

In a separate Facebook post in 2018, Greene also claimed: “I am told that Nancy Pelosi tells Hillary Clinton several times a month that ‘we need another school shooting’ in order to persuade the public to want strict gun control.”

Hananoki also surfaced a November 2018 post on Thursday night in which Greene argued that a space laser controlled by a Jewish cabal is responsible for wildfires in California. Really!

But Greene did more than express conspiracy theories about the 2018 Parkland, Florida, shooting with a keyboard. On Wednesday morning, Fred Guttenberg, whose daughter Jaime was killed in the shooting, posted video on Twitter of Greene haranguing Parkland shooting survivor and activist David Hogg while he walked down a Washington, DC, street.

“I carry a gun for protection for myself, and you are using your lobby and the money behind it, and the kids, to try to take away my Second Amendment rights,” Greene says to Hogg during the video, as Hogg — who founded the gun-control group Never Again MSD after the shooting — ignores her.

“Why do you use kids?” Greene adds, as if Hogg chose to live through a mass shooting. “He’s a coward.”

.@mtgreenee, is this you harassing @davidhogg111 weeks after the Parkland shooting, that my daughter was killed in & he was in? Calling him a coward for ignoring your insanity. I will answer all of your questions in person. Get ready to record again.pic.twitter.com/aQjL74x7kh

Hogg’s sister and Never Again cofounder, Lauren Hogg, responded to the video by tweeting that “The harassment that [David] and I received in the aftermath of the shooting was so severe that I have more PTSD from the harassment and conspiracy theorists that we’ve had to deal with than I do going through the actual shooting.”

Then, when a reporter tried to ask Greene about her Facebook posts and the video of her accosting Hogg during a Wednesday night town hall in Greene’s district in Georgia, the reporter was threatened with arrest.

WATCH: This is the moment Rep. Greene’s office says our team “caused a disturbance” by asking a question, just as others who were attending the town hall had done previously. You can hear the deputy say my team would be charged with “criminal trespass” if they didn’t leave. pic.twitter.com/mP1ZXYzTil

None of this, however, stopped House Republican leadership from announcing Greene’s placement on the education and labor committee on Wednesday. Nor does it appear to have given them second thoughts. A spokesperson for McCarthy, Mark Bednar, told CNN that the House minority leader planned “to have a conversation” with Greene over the “deeply disturbing” posts highlighted in the CNN article, but few seem to expect Green to suffer any real consequences.

That’s perhaps because other Republicans haven’t experienced serious consequences for similar rhetoric. During an MSNBC appearance on Wednesday, Rep. Alexandria Ocasio-Cortez (D-NY) referenced McCarthy’s refusal to punish then-Rep. Ted Yoho (R-FL) after Yoho called her a “fucking bitch” within earshot of reporters last summer and said she didn’t expect things to unfold differently this time around.

“He said he was gonna pull Rep. Marjorie Taylor Greene after her comments to Parkland activists and commenting that Muslim Americans should not fully and freely serve in the House — that they must be forced to swear on a Bible, etc. — but I’ve seen Kevin McCarthy pull someone aside before for a talking to, and that representative that I last saw him do that to was Rep. Ted Yoho of Florida,” Ocasio-Cortez said. “What Kevin McCarthy did was that he pulled him aside to essentially excuse his behavior, to allow it and abet it.”

“This term there are legitimate white supremacist sympathizers that sit at the heart and at the core of the Republican caucus in the House of Representatives … Kevin McCarthy answers to these QAnon members of Congress” — AOC pic.twitter.com/n0r2bafAlL

Republicans could give Greene the Steve King treatment

You don’t have to go far back in history to find a precedent for McCarthy stripping a Republican of committee assignments. That’s exactly what happened to former Rep. Steve King of Iowa in January 2019 after King, who had a long history of racist comments, did an interview with the New York Times in which he said, “White nationalist, white supremacist, Western civilization — how did that language become offensive?”

Reporting in Politico’s Huddle indicated Republicans justify keeping Greene on because King said his comments while holding office and Greene’s comments came before she was sworn in.

But it isn’t so easy for Republican lawmakers to distance themselves from Greene, because conspiracy theories aren’t as far to the fringe of the modern Republican Party as some might think. A YouGov poll conducted earlier this month found that 30 percent of Republican voters respond positively to QAnon, and both McCarthy and Trump embraced Greene during her campaign.

And while Democrats aren’t happy with Greene’s continued presence in Congress, it’s extremely unlikely Rep. Gomez’s resolution calling for Greene’s expulsion will go anywhere. Expelling Green would require approval from two-thirds of the House, and there’s no indication that more than a handful of Republicans would be willing to get rid of a member whose worldview is shared by a significant portion of the party’s base.

“Kevin McCarthy answers to these QAnon members of Congress,” Ocasio-Cortez said on MSNBC.

Greene is also scrubbing her Facebook of old posts and videos from 2018 and 2019 where she spread conspiracies and endorsed violence against Democratic lawmakers. pic.twitter.com/3HoVGU2VZR

In response to a request for comment on Gomez’s resolution calling for her expulsion, Greene spokesperson Nick Dyer called it a “ridiculous Democrat cancel campaign” and added the following:

Democrats and their spokesmen in the Fake News Media will stop at nothing to defeat conservative Republicans.

They are coming after me because I’m a threat to their goal of Socialism.

They are coming after me because they know I represent the people, not the politicians.

They are coming after me because, like President Trump, I will always defend conservative values.

They want to take me out because I represent the people. And they absolutely hate it.

Greene, meanwhile, tried to direct reporters to old social media posts in which she managed not to offend anyone.

Since the media wants to define me by my old social media posts, then why won’t they run breaking news stories on these old post of mine?

Those fears have obviously turned out to be well founded. But instead of ostracizing Greene and QAnon, House Republican leadership seems to be learning to live with them.